Have you noticed on our home page there is a small business award logo?

In Autumn last year, I joined Twitter. As a growing brand on Instagram and Facebook, I felt that the business needed a totally different way of networking and marketing. Twitter is exactly that, more business orientated and connected to other companies.

As a keen Dragon's Den fan who watches every single episode, I followed all the Dragons, past and present on Twitter. That is when I discovered that Theo Pathitis was a keen supporter of small businesses and held a weekly Twitter competition.

Every Sunday evening, Theo would give the opportunity for small businesses like mine to tweet him with a reason why they should win an award. I set my alarm for the following Sunday to enter and I did; with a short, simple tweet and a photo of one of my popular personalised champagne flutes.

It was my one and only entry because I WON FIRST TIME! I was over the moon, my mobile was pinging non stop for days with Twitter notifications and was quite a rollercoaster ride that week.

Then Christmas came along and it was extremely busy here. I continued tweeting and networking with other winners now and again. Soon after Christmas, the emails from Theo's team were coming in with details of the event. It was held at the ICC in Birmingham's centre.

On 12th February, myself and a friend who later on went to win the award for her small business, got up very early and drove to Birmingham for the exciting event. Equipped with a handbag full of business cards, notebook and pens for the day ahead.

The event was held in a large hall and had various stands where you could speak to companies such as HP, DHL and Ryman. We headed straight to the photo shot stand, where we nervously awaited and had a professional shot taken.

There was a programme detailing all the presentations and sessions that we could watch on the balconies. I had  'speed dates' with marketing and e-commerce management from Ryman and Robert Dyas. They gave me invaluable advice which I noted down in my personalised book.

Time flew that morning and tea, coffee and biscuits were flowing! On the main stage were the Theo Pathitis Retail Group CEO, a marketing expert from Google and a couple of other expert giving speeches. After a delicious lunch of sandwiches, mini quiches, wedges and wine, we sat down near the front row by the main stage.. One of the main events was the 'chat show', Theo Pathitis interviewed Sir Tom Hunter, a legendary businessman from Scotland. This was truly inspiring and humbling, and turned out to be one of my highlights of the day.

After this, it was our moment - the best part! To collect our well earned certificate and meet the one and only Theo Pathitis. Understandably there was quite a queue, although this was only for those attending the event for the first time.

Meeting Theo was the icing on the cake. A very down to earth guy with alot of business sense, not a dragon at all! I learned alot that day and will use all the advice given to me throughout the day..

Leaving the event with a complimentary bag full of lots of awesome freebies, we strolled into Pizza Express for dinner before driving the 2.5 hours back home to Hertfordshire.

As a winner of the Small Business Award, I am now part of a business family, not just on Twitter but Facebook and Instagram too. I have access to the exclusive SBS club where I can promote, get discounts and get advice.

Out of the 370000 businesses that applied over the years, less than 1% have won. I still can not believe, I am within that tiny number of people!

So if you are a small business, please enter the competition on Twitter. It is well worth the entry! 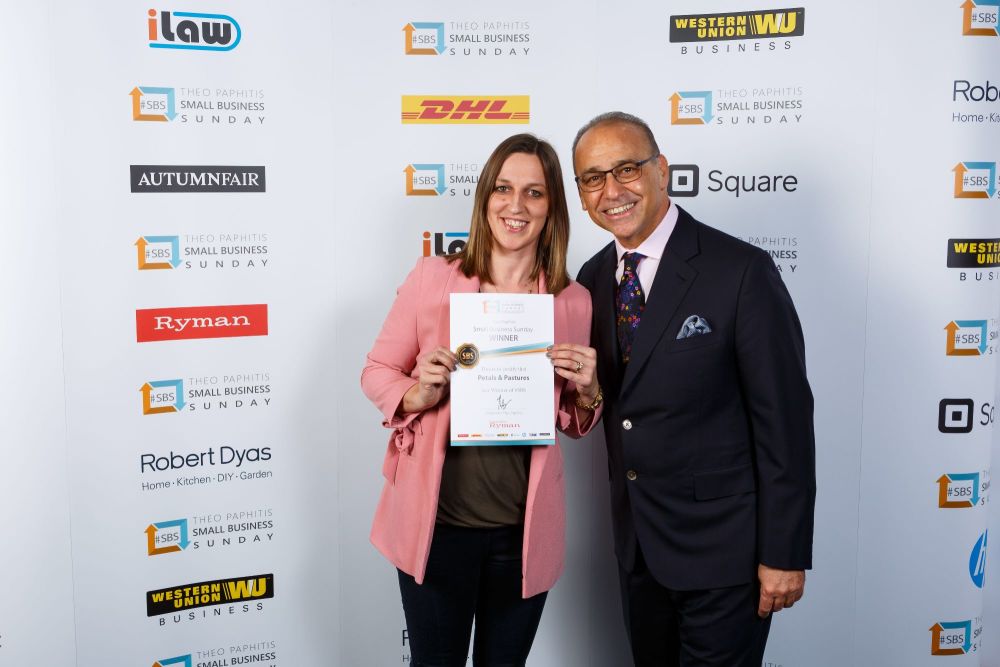